Every Mobile Legends gamer will always buy and then follow the items while in the game. The goal is that the hero used becomes stronger. In addition, by buying certain items will increase the damage, attackspeed, cooldown reduction, heal point, and others.

Of all the items available, there are some of the most frequently used and often preferred items. Anything ? Immediately refer to 10 Best Used Items in Mobile Legends. 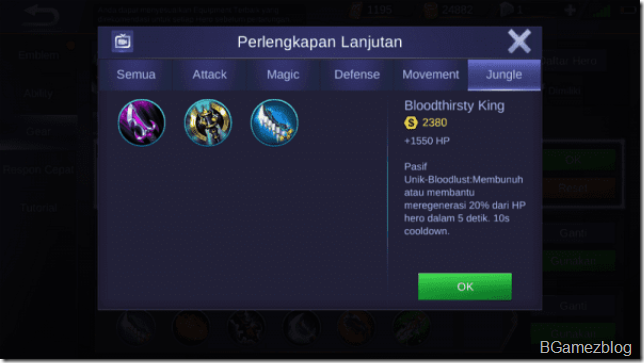 Jungle items like Hunter's Knife, Nimble Blade and Pillager Ax will be very useful at the beginning of the game. The usefulness of the item is to increase the damage to the forest monsters so that the farming becomes faster. In addition you will also get a few percent HP when killing the forest monsters. That is the reason why jungle items are often used by Assassins, Marksman, Fighter, or Mage. 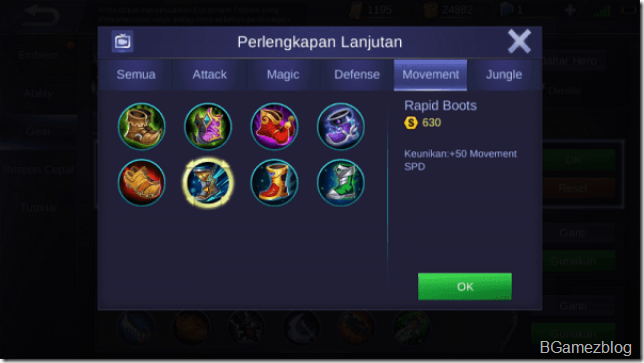 Boot items are very useful for all heroes, because they can increase by +40 to +50 hero Movement Speed. Buying Boots will make your hero move faster and frisky. 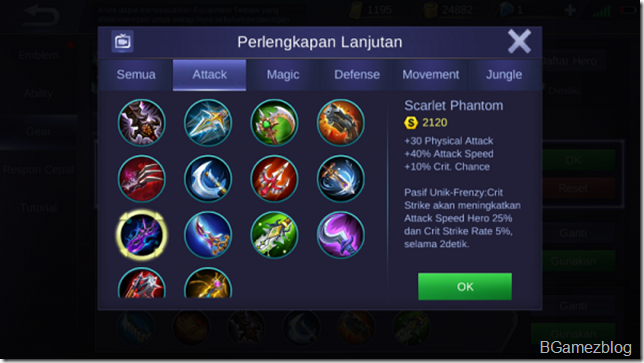 User Marksman must be familiar with this one item. Yep! Scarlet Phantom is able to increase by + 40% Attack Speed, +30 Phisycal Attack, and + 10% Critical Chance. After purchasing this item, the attack speed hero you use will increase dramatically. Hero Marksman always use this item to increase his attack speed, and sometimes heroes Fighter and Assassin also often use it. 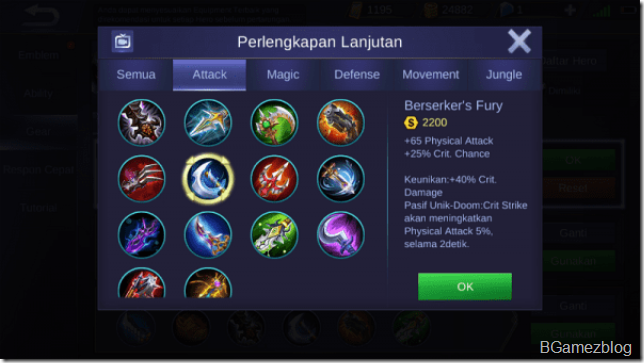 Berserker Fury is a must-buy item for Marksman, Fighter, and Assassin because it can increase Critical Chance by 25% and also add +65 Physical Attack. Usually this item was purchased before Scarlet Phantom. 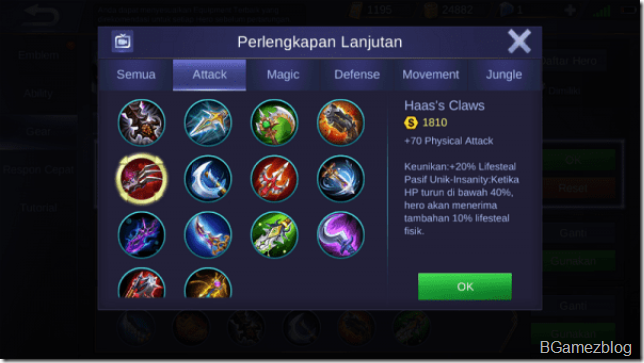 Haas's Claws is the most important item because it can help your hero stay alive by getting a few percent HP when killing jungle monsters or minions. If you already have this item, you no longer need to go back and forth to base to fill HP, just attack minions then HP will increase by itself. In addition Haas's Claws also add + 70 Physical Attack. 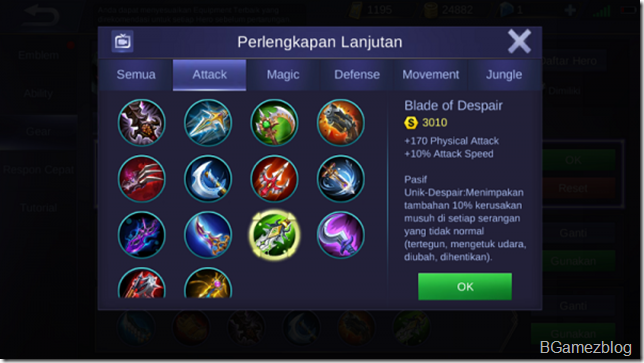 Among all physical items, Blade of Despair has the greatest effect, adding +170 Physical Attack as well as an additional 10% Attack Speed. Usually the players buy this item most recently when other items are complete because the price is quite expensive. 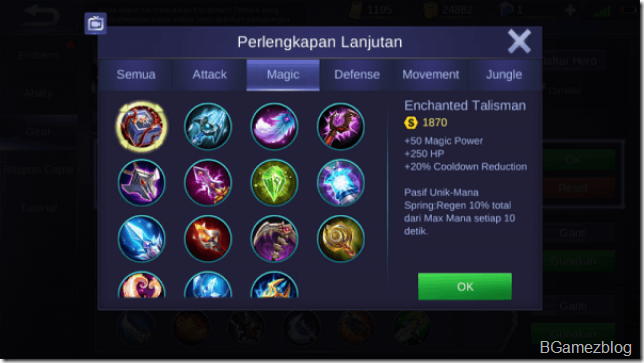 Enchanted Talisman is the magic item most often purchased by the Mage because it can increase by 20% Cooldown Reduction, +250 HP and +50 Magic Power. Given this item, your cooldown skill will be faster than ever. 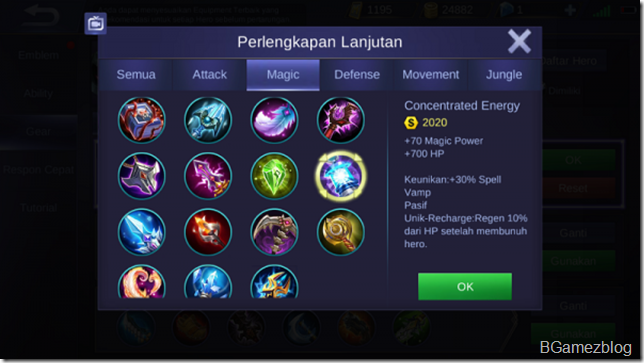 This one item is similar to Haas's Claws, which is capable of adding HP from killing monsters or minions. But the difference is this item is special for the Mage, while Haas's Claws for the Fighter or Marksman. In addition, Concentrated Energy also provides an additional +700 HP and 10% regen from HP when killing enemy heroes. 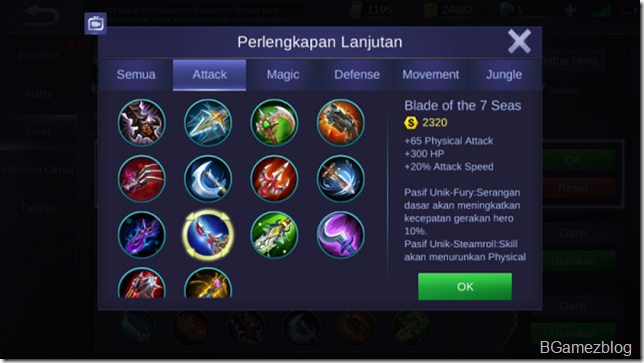 Blade of The 7 Seas is often used by Fighter and Marksman because it is able to add as much as +65 Physical Attack. Additionally this item also adds +300 HP and + 20% Attack Speed ​​becomes attack speed heromu becomes slightly faster. 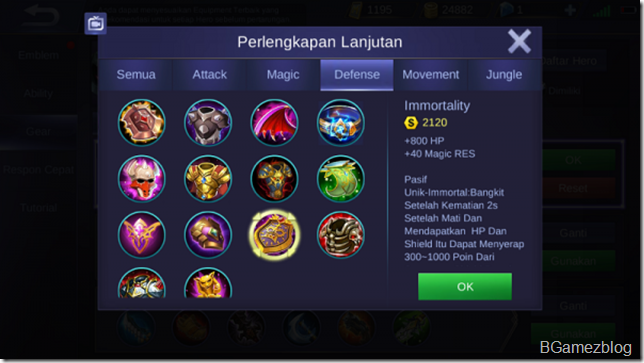 Among all the Defense items, Immortality is most often used because it can make your herom rise after death and get about 15% HP. It also adds +800 HP and +40 Magic RES. This item is always used by the Tanker. So if there is a player who died and then suddenly got up again, do not you think he cheats ya.