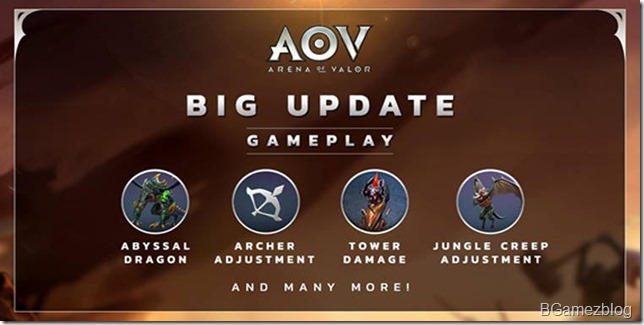 Arena of Valor announced the release of a Big Update on Thursday, December 6, 2017 that brings a lot of changes, ranging from the hero, items, gameplay, and other new features.

The following details the changes to the Big Arena Gameplay Updates of Valor in December 2017.

In addition to a big update on the hero and the presence of ftur recently, the adjustment will occur also at in terms of gameplay.

One of them is the adjustment on the Abyssal Dragon.

Abyssal Dragon is a very valuable resource in the match. However, the contribution of the Abyssal Dragon currently have exceeded the expected.

According to statistics, the team that captured the first Dragon Abyssal has always had a very high winning percentage.

Even in the tournament, winning number exceeds 80%.

This condition affects the experience of playing the AOV. For that, after the big update December 2017, EXP and Gold obtained from Abyssal Dragon will kill fewer early in the match.

In addition, the Abyssal Dragon will also be more active in pursuing opponents.

The bushes are near Abyssal Dragon or Dark Slayer was also eliminated.

The following adjustments against Abyssal Dragon.

With the adjustment of AI Abyssal Dragon, then he will be more active in pursuing opponents.

That way, gamers can use it for fishing Abyssal Dragon out of the nest.

Note: for optimal playing experience, similar adjustments were also made against Bush in the area of the Dark Slayer.

Hero-the hero can rapidly approach the hero archer nor when the killing directly away from the reach of archer with instantly.

It makes the hero types that have low mobility archer hard to do enough resistance.

Therefore, Garena will generally raise the speed move hero archer and also coverage of his attack, so that the experience of playing became even more exciting.

The following adjustments against Archer.

When the hero remotely get Red Buff, the effect of mobilising to slow Movement Speed is no longer the enemy bertetap at 15%, but will be changed from 16% to 30% of the corresponding level hero.

Note 1: when the hero at close range getting Buff, then the effect is slow Movement Speed anyway in the form of 30%.

Note 2: additional Damage acquired long distance when the hero gets red to buff (so get extra damage when adjacent to the enemy), keep half of the hero.

Based on the data and analysis of the results of the game, the presence of archer 20% below expectations.

Even in various tournaments, large-scale use of hero archerhampir class no.

This is caused by the environment Arena Antaris is currently not very profitable hero archer so they cannot show their skills to the maximum and perform its role properly.

Therefore, do a little bit of change in Garena tower, in order to increase the value of the role of archer.

On a big update December 2017, damage of the tower will be improved.

In addition the high ground tower will also give the effect of slowing down the movement of the hero who hit by hit.

The following adjustments against the Tower.

A Reduction In Movement Speed
High ground attack tower and base will slow the movement speed of the target by 30% in one second, so the hero at close range would be higher risk while attacking.

Tier One Tower Lane's Dark Slayer
The outermost defense tower (tower tier one) who are in the Dark Slayer lane will earn a 40% damage resistance from attacks.

In times of high ground tower/base there is no creep, extra physical and magic resistance of 1000 points into 1600/2000 points.

Change Audio on some Hero

Winter theme: to celebrate winter, the background music when the login screen and the lobby has been changed, as well as sound effects while search teams manages.