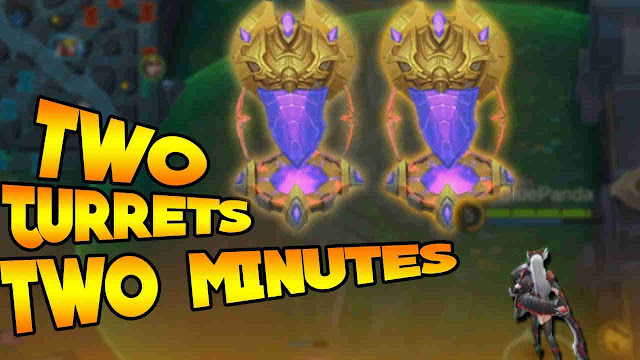 Of the many heroes in Mobile Legends, here are 5 of them that can destroy the tower quickly.

The first hero that can destroy tower quickly is Marksman armed with arrows, Miya. With his 1st skill, Miya can shoot arrows repeatedly into his locked target. Very suitable to destroy tower. Moreover, Miya has the ability to disappear, making it easier to reach the tower without an opponent detected.

When in human form, Roger is a powerful Marksman. But when it changes in wolf mode, then Roger's magic will increase as well as become a Fighter. When in wolf mode anyway, Roger has enormous damage. Therefore it is very suitable to be used to attack the opponent tower. With a little strategy that ciamik, Roger can destroy the opponent tower easily and quickly. For you who want to use Roger, you should read the latest Roger Mobile Legends Guide ever Androbuntu review.

Karrie can perform very fast attacks. Especially if coupled with his ultimate skills. Because of its ability, Karrie often become a mainstay team to destroy the opponent tower. But even so, not indiscriminately people can use Karrie. Because Karrie is a hero that is quite difficult to use. You should really master it if you want to destroy the opponent tower quickly.

Next there is the beautiful Layla. Layla is a very user-friendly hero. Coupled with his damage is quite high, making Layla became one of the prima donna hero beginners. If you've reached the late game, Layla will be more powerful because rarely attack will be very far away. Layla can even attack the tower beyond the range of the tower attacks itself. So, Layla can strike the tower casually without fear of being hit by a counterattack by the tower. Really cool.

Zilong has the ultimate skill that makes it run very fast. Not only that, Zilong can also kidnap the hero of the opponent with his very terrible skill. Zilong often becomes a hero whose job is to destroy the opponent's turret with ease. Usually when attacking tower, players will use ultimate skill first. With so the process of destruction of the opponent tower can run properly.

Zilong is one of the mainstays to destroy the opponent tower. For those of you who want to use Zilong, can read the tips and tricks of using Zilong Mobile Legends.

The 5 heroes above are perfect for those of you who want to successfully match matches in Mobile Legends. Of course you do not just rely on heroes alone, you also have to work with the team also use the build items that are suitable for each hero.