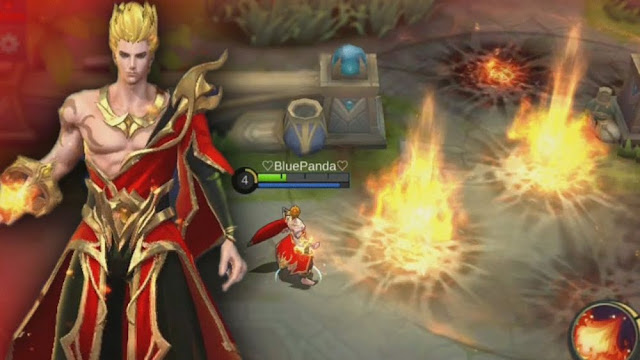 Through advanced server, Mobile Legends re-introduce one new hero mage that is Valir.

After a few weeks ago Mobile Legends presents Gussion or Gossen as the latest hero assassin that relies on magic damage, now a new hero re-emerged and again still rely on magic, that is Valir. A hero mage with tremendous fire power. To get it you can buy Valir at the shop for 32,000 battle points or the equivalent of 599 diamonds. This one hero can be said to have tremendous potential to replace her now more moba-relying meta hero. The extraordinary area of ​​his entire skill can make the enemy hard to deal with.

Those are some of the advantages of Valir. Still want to know more about this one fire mage? Check out hero stats, fighting ability or hero score below. 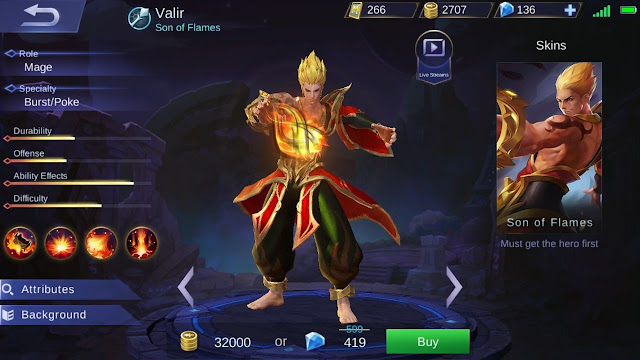 From the picture above, it is clear how great his ability effect. Such a large area with high damage magic makes it possible to injure many enemies at the same time while making it difficult to approach. Not to mention his passive skills that really help Valir save himself when being pursued by enemy heroes.

Unfortunately, this one hero does not have an escape mechanism. He was fairly weak when dealing directly with one of hero support that is Diggie because all his skills can not produce control effect for a while.


Burst Fire (On) - Skill 1: Blow up the fire in the target area. Produce some magic damage and reduce movement speed by 80% for 1 second.

Searing Torrent (Active) - Skill 2: Valir fires a wave of fire into the area in front of it, repulsing the enemy and producing some magic damage. The enemy at the end of the skill area will be exposed to additional magic damage.

Hellfire (On) - Ultimate: Call hellfire in a randomly specified area. Any explosion affected by the enemy will produce magic damage and throw enemies into the air with a short duration.

Arcane Flame - Passive: Every 20 seconds, Valir can use Burst Fire or Searing Torrent without providing cooldown.


In terms of damage, all Valir skills can be spelled out very sick, especially Searing Torrent. If the enemy is hit by this skill twice in the tip area, at level 1 the enemy's blood will be reduced to half even if it is a tank hero.


With such a large skill area, Valir can hurt many enemies at once, especially his Hellfire. If 5 enemies are at once in the middle of the Hellfire area, wiped out can be obtained easily.


The skill does look really great, but it feels like it's worth the difficulty of Valir. All of his skills are target areas and can still be easily avoided with Flicker. Not to mention the lack of escape mechanism so that he can still easily targeted hero-charger.

Keep always behind the enemy tank hero and surprise them with the appearance of Valir skills so that he can contribute more in team fight. Good luck!