Certainly, considering April 1 you will find many interesting things. In the gaming world, many "nosy" developers on this sacred date. Starting from updating strange content or cheating on players, there are many unique moments that you can find on this April Fool day. Interestingly, actually coming from the game community on Reddit when sub r / games turned out to be closed for a while.

The forum moderator explained that this was done to reflect on some of the things that were missing from SubReddit. Over the years, the largest game forum on Reddit was considered to face many issues. One of them is ideological conflict that revolves beyond the problems of the game to make many people complain about the available space. The number of memes that revolve around minorities is considered to be starting to make many parties feel offended, especially because such materials should not get a place on SubReddit Games. 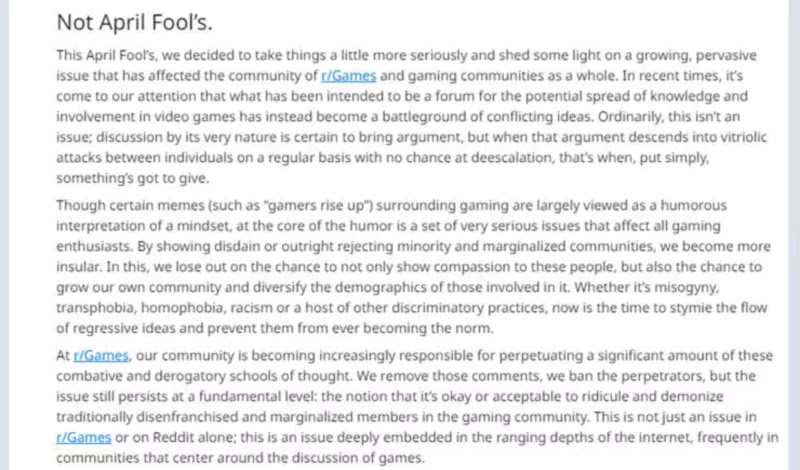 It seems that Reddit's moderator for the game category wants to make April Fool day to give a little space for introspection to the community. In its closing, donation pages for movements such as the empowerment of women and other minorities are displayed so that many parties are able to pay attention to such issues. Responding to this news, many actually consider the moderator's steps to be mere sarcasm. This kind of movement is considered rare on the Reddit forum which is considered free and transparent.

Apart from that, the gaming community around the world had become a scapegoat when terrorism in New Zealand became a public concern. The shootout game was blamed as the cause of this kind of terrorism action could occur. In fact, all returned to players and community members who should be able to behave positively in the community. Indeed, ideological conflicts and violence cannot be avoided and so far, video games have never provoked this.

Following the closing of this SubReddit, many forum members commented on it elsewhere. Pessimistic attitudes and tend to be indifferent from some members of the forum who considered this action not functioning to get scathing criticism from moderators and members of other forums. The moderator explained that there would be another metathread that would be launched when reopening the SubReddit, later.