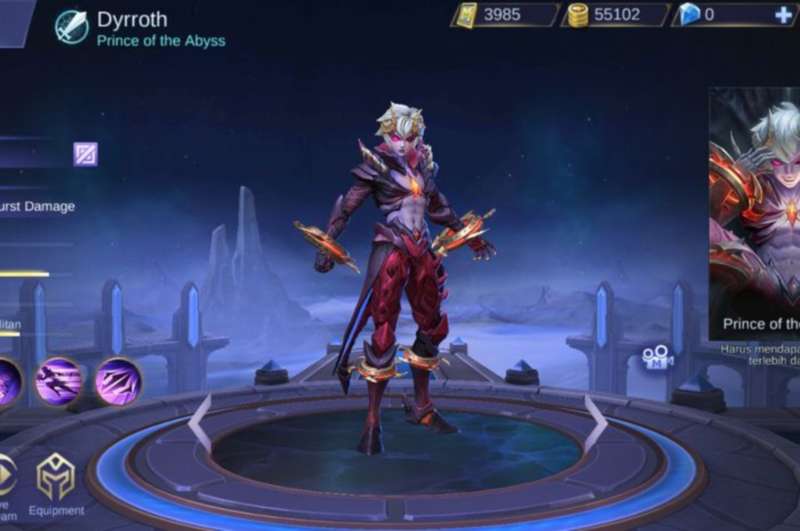 This Hero Fighter has the nickname Prince of the Abyss with Charge / Burst Damage specialties.

For those who don't know, Dyrroth originally appeared first on Advanced Server or Mobile Legends Test Server under the name Dyrus.

Well, in the Mobile Legends update version 1.3.88, finally Dyrroth was officially released and can be purchased for 32,000 BP or 599 diamonds.

Immediately, here is the recommendation to build a Dyrroth item that you can use when playing Mobile Legends.

This item can provide supplies for Dyrroth farming, clear minions or survive when facing opponents during early games with an additional stat +35 Physical Attack and + 25% Attack Speed.

Dyrroth definitely needs attributes to increase the speed of its movement to navigate the lane, then this Swift Boots item will add +40 Movement Speed.

Besides adding movement speed, this item is also suitable for Dyrroth because it adds + 15% Attack Speed.

Haas's Claws is the third item suitable for use by Dyrroth because it can add +70 Physical Attack and + 20% Physical Lifesteal which is very useful for him in the middle of the game.

Well, if this one item will add +65 Physical Attack, + 25% Critical Chance and + 40% Critical Damage to make Dyrroth's skills more painful for the opponent.

Towards the late game, you can buy Scarlet Phantom items that can add +30 Physical Attack, + 20% Attack Speed and + 25% Critical Chance.

Who doesn't know expensive items that can give +170 Physical Attack and is very useful at the late game?

Yep, Blade of Despair is a mandatory item for late games that can make Dyrroth's skills even more deadly.

In addition, there is an increase of + 5% Movement Speed from this item.