Dyrroth's presence on the Land of Dawn is indeed very promising. All thanks to the ability to reduce enemy armor which makes the damage feel very large.

Even so, this one anti-tank fighter is not easy to play. Dyrroth does not have good survival skills. This will always lead to death and defeat in the battlefield.

In this article, we will share a balanced Dyrroth build item. That is, he will still have high attack power and a good level of defense. Well, let me not be curious, please refer to the description below. 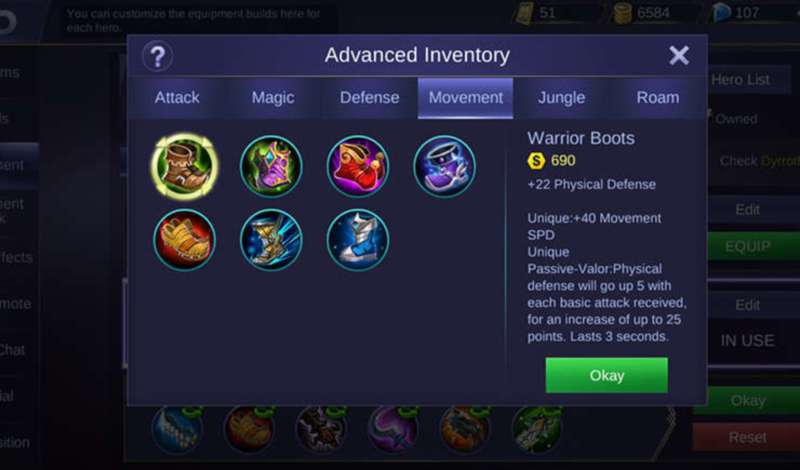 The first item that needed to be bought as soon as possible was the Warrior Boots. Because, this item can provide armor for 22 points and movement of 40 points.

Increasing movement is one of the important things needed in a fight. He can also move quickly to the ability to escape or chase enemies.

In addition, the selection of Warrior Boots is also based on increasing armor to withstand physical damage from enemies. Because, Dyrroth which is very suitable to be played aggressively will require a good level of defense. 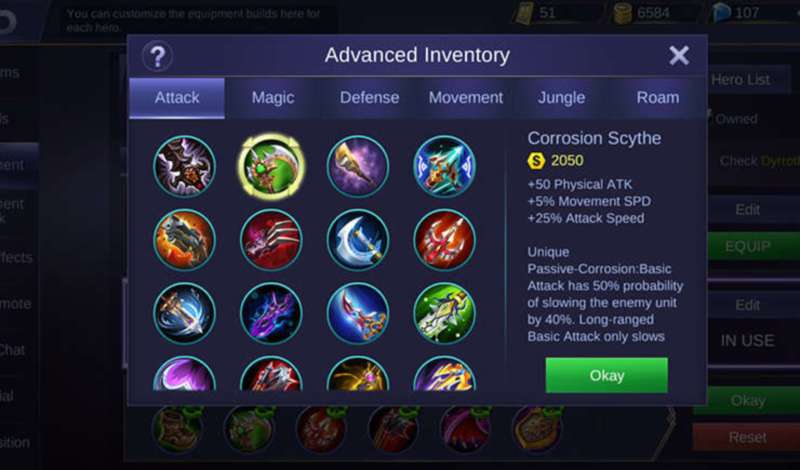 Corrosion Scythe is the first Physical Damage item we can use. The item can provide 50 Physical Attack, 5% movement, and 25% attack speed.

Scythe Corrosion can be an option to increase damage-per-second (DPS) from each Dyrroth attack. Because, the faster the attack can be issued, the greater the damage that can be generated every one second.

The selection of Corrosion Scythe is also based on Dyrroth's weakness from chasing enemies. With the ability of this item, he can provide a reduction in movement of 40% to the enemy he attacks. 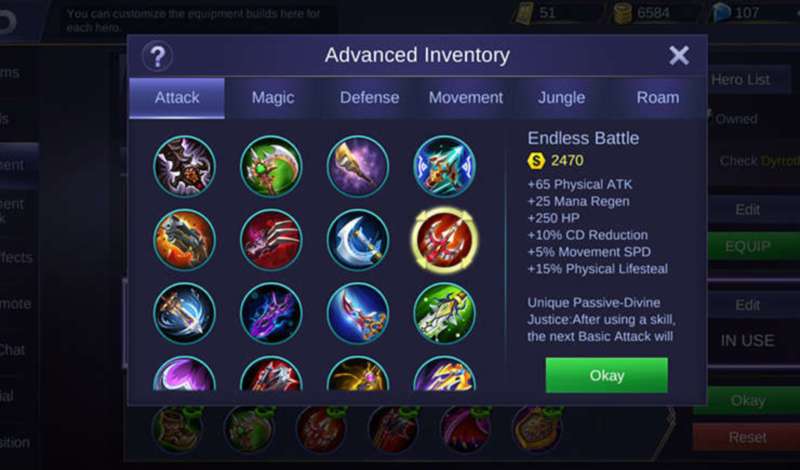 Endless Battle is the third item that we really need to get. Endless Battle can provide 65 Physical Attack, 25 mana regeneration, 250 HP, 10% reduction in skill duration, 5% movement speed, and 15% lifesteal effect.

There are two passive attributes that are very needed by Dyrroth, namely the reduction of skill duration and lifesteal effects. In addition, Endless Battle also has the passive ability of Divine Justice which can add 85% Physical Attack as True Damage.

Reducing the duration of cooldown skill is one of the variables for Dyrroth. Because the Hero Fighter was forced to play aggressively by relying on a series of all his skills. 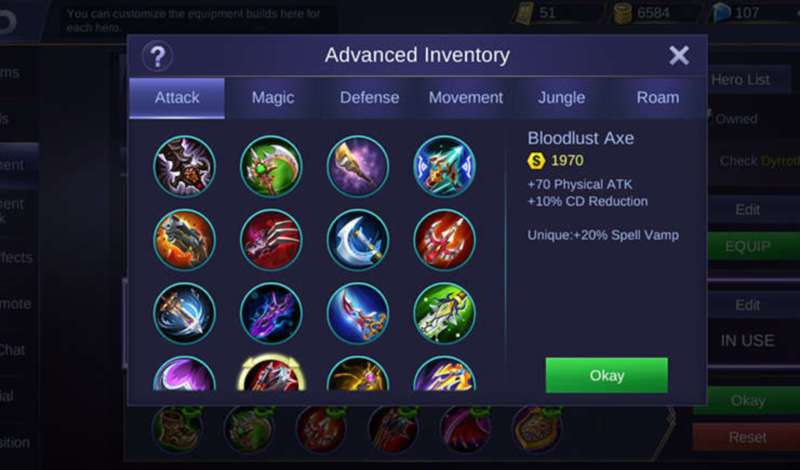 In essence, Bloodlust Axe can increase attack capabilities and Dyrroth's durability. This will have a direct impact on his ability to survive in combat.

On the other hand, reducing the duration of cooldown skill allows Dyrroth to be able to use his skill more actively than before. With a short cooldown duration, the attack capability will certainly increase dramatically. 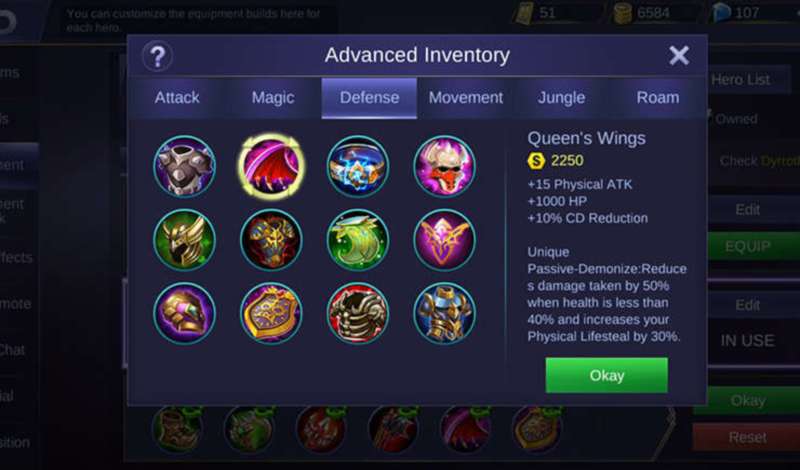 Dyrroth, who was easily killed, needed a pretty good defense item, the Wings of the Apocalypse Queen. The item can provide 15 Physical Attack, 1000 HP, and 10% reduction in cooldown duration.

By getting 1000 HP, Dyrroth will be much harder to kill. That way, we can close the deficiency of its endurance.

In addition, Wings of the Apocalypse also has passive Demonize abilities. This passive ability can reduce 50% of the damage received and give an additional lifesteal of 30% when the HP is below 40%. 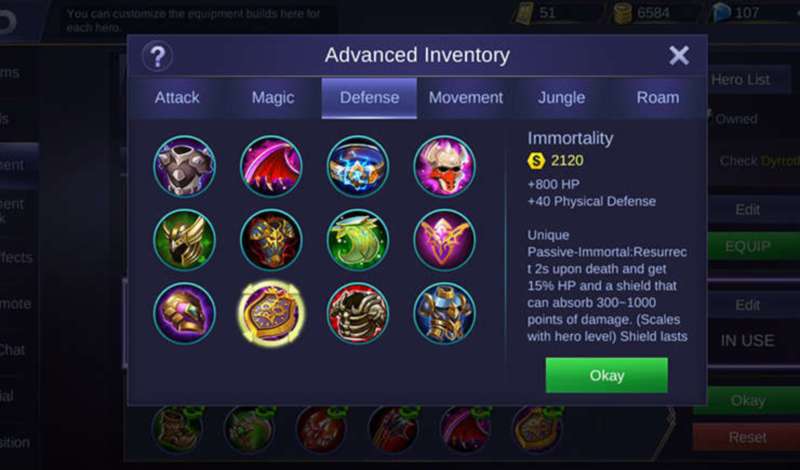 Immortality is a defense item that complements Dyrroth. This item gives 800 HP and 40 Physical Defense. Increasing Physical Defense can be said to make it unnecessary to hesitate to finish off enemy carry heroes in the late game.

The main reason for Immortality being the choice of defense item was the Immortal passive ability it had. Immortal ability allows a dead Hero to come back to life in a battle with 15% of HP.

Although the number of H-P is very small, we need not worry. Because, with the help of Wings of the Apocalypse, Dyrroth who only has 15% of HP when living in a fight will still be able to survive.