Must have! 5 Advantages of Khaleed in Mobile Legends 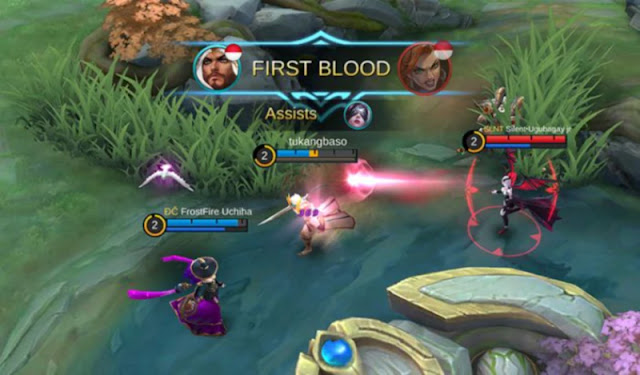 After Yu Zhong, Moonton again presents a new Hero Fighter in Mobile Legends, namely Khaleed. Has excellent Burst Damage and HP regeneration abilities. Ulti Khaleed has a pretty good area attack and crowd control.
Although it's not yet an official release, you can try Khaleed on the main server by taking a pre-order for 20 Diamond. This pre-order will give you 3-day Trial Card.

Here are the advantages possessed by Khaleed

1. Pain Damage from the Beginning of the Game

As a fighter, the very high level of Burst Damage allows Khaleed to deal very high damage output to the enemy. No wonder, for now, Khaleed can easily get a large number of kills or assists.
Even more epic, Khaleed can use up to three times. Not to mention, Desert Tornado has a fairly short cooldown duration, which is only four seconds. Thus, this Hero Fighter can use it on many combat opportunities.

The HP's regeneration ability is obtained through the skill - Quicksand Guard. The second skill allows him to fill 135 + 10% of his total depleted HP. Not only that, Quicksand Guard also allows Khaleed to reduce damage from enemies by 70%.
HP's regeneration ability has an impact on increasing durability. Not surprised, despite having an ordinary level of defense, Khaleed was quite difficult to conquer.

Role Fighter is sometimes bound by the function of an initiator. The function of an initiator is very important in combat. Because, the initiator can open up opportunities to create battles that benefit the team.
Khaleed can initiate Ultimate attack skills - Raging Sandstorm. The Ultimate Skill allows it to summon a sand tsunami in the direction specified. After arriving at the destination point, the tsunami will have a stun effect for one second in a relatively large area. The ability to stun the area is quite important for an initiator.

5. Great Potential as a Ganker Hero

Khaleed is arguably a Hero Fighter with the most complete abilities. Because, Khaleed has the ability to mobility, area attacks, and crowd control (CC) effects. Hence, the three abilities can be maximized to do ganking.
The disadvantage that must be faced by Khaleed as a ganker is the CC ability which is quite low, only slow and stun with short duration that can be relied upon.